It’s weird. I thought it would be more strange coming home. I didn’t experience any jet lag and so far there has been minor culture shock. Either the culture shock is slowly going to set in, or I have successfully integrated the Thai attitude into myself. I’m hoping it’s the latter.

I’m taking a couple of weeks to catch up with friends and get settled before I make any big decisions on what I plan to do next. I have a few ideas but absolutely no solid plans. It’s nice to have a great void of unknown in front of me. I hate routine and if given the option to peer into my future, I would decline. I don’t want to know what’s coming and ruin the surprise. I also don’t want to fall into a lifestyle that will likely look the same 10, 15, and 20 years from now. BUT, a person’s gotta make a living. I’m not anxious yet but ask me again in a couple of weeks.

Now that I’m home and in a stable environment with internet access, I can catch up on my blogging. I already have a list of 15+ topics that I’d like to write about. Hopefully you’ll be seeing a wave of new stuff soon! 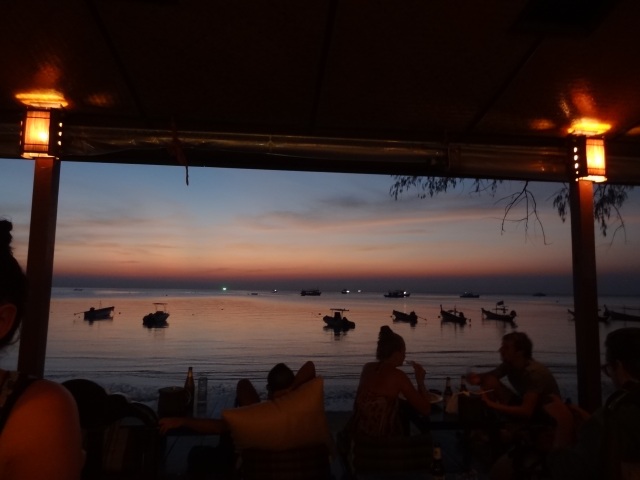 One of the things that never gets old for me is sitting out at night, in the comfortable heat of the tropics. It’s a novelty to me.

As a native to Seattle, night time means freezing cold weather that requires a down jacket, a scarf, and maybe gloves. Even in the Summer, a light jacket is usually needed. At least for me anyway…

Cheers to tropical weather and sunset dinners on the beach! ❤ 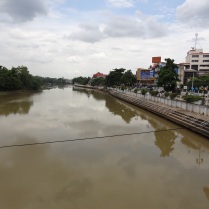 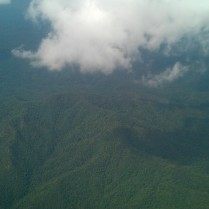 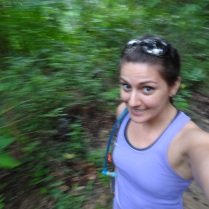 Leaving was hard. If only you could have heard my inner monologue as my parents were driving me to the airport. It went something like this: “SHIT SHIT SHIT SHIT. What the (insert other 4 letter word) am I doing? There’s no going back now… Oh my god.” I was sweating and my heart was racing as we approached the departure drop-off. I was shaking by the time I kissed and hugged mom, dad, and our dog goodbye.

Everything went smoothly until Bangkok. Somehow I slept for 8-9 hours on the flight from Seattle to Taipei… It felt like 3. During that flight I made two new friends! (1) My seat neighbor, Monique from Queen Anne who is originally from Taiwan, and (2) a professional fellow rock climber named Michael.

Bangkok in short….sucked. I got off the plane, made it through immigration, and got my bags fine. I had booked a separate flight to get to Chiang Mai. I followed the signs to “departures” (after waiting for 2 elevators that didn’t work and nearly falling up an escalator had it not been for my rescue by a monk and his friend).  After I finally made it to the 4th floor with all my luggage, a good samaritan asked if I needed help. After talking with him and an airport employee we realized that I was at the wrong airport. CRAP. I was directed to a free shuttle which took me directly over to the airport for domestic flights. It was about a 35-45 min ride. I knew I was going to miss my flight but didn’t care. I figured something would go wrong along the way… Long story short, I had actually booked my flight one day too early anyway. I had to pay out-of-pocket for a new flight plus excess baggage fees. I think it ended up being somewhere in the neighborhood of $200 (not bad).  I had 5 minutes to run with my two giant bags and heavy backpack to the check-in before it closed followed by a brisk walk to the gate for boarding. SUCCESS!

That first night alone in my room was rough. The room was a little more… rustic than I was expecting which was fine but the mold in the bathroom was a bit of a disappointment. Black, yellow and pink!  I was also afraid to leave to venture out and find food. Eventually I mustered up the courage to walk around the block to the marketplace. I found a few food carts and opted for some Pad Thai thinking it would be a safe choice. It was SOOOO SPICY, ah! I managed to eat half. It was a small serving so not too much went to waste. I shoveled as much in my mouth as quickly as possible but eventually the burn caught up with me and hurt way too bad. I tried taming the heat unsuccessfully with Oreos. After 20+ hours of traveling, it was time for bed. This concluded day 1!

It was a long, emotional journey. I certainly felt out of my comfort zone to start, but it’s amazing how quickly that passed. When I was leaving the Chiang Mai airport I did meet a nice British girl. We swapped info and are now friends. (More stories to come to catch you up on our adventures.) I attribute the ease of my transition here to her friendship. People and relationships make such a difference in the quality of our lives. This I already knew and appreciated in Seattle, it’s just nice to have this reaffirmed 🙂 A big thanks to Krishna!